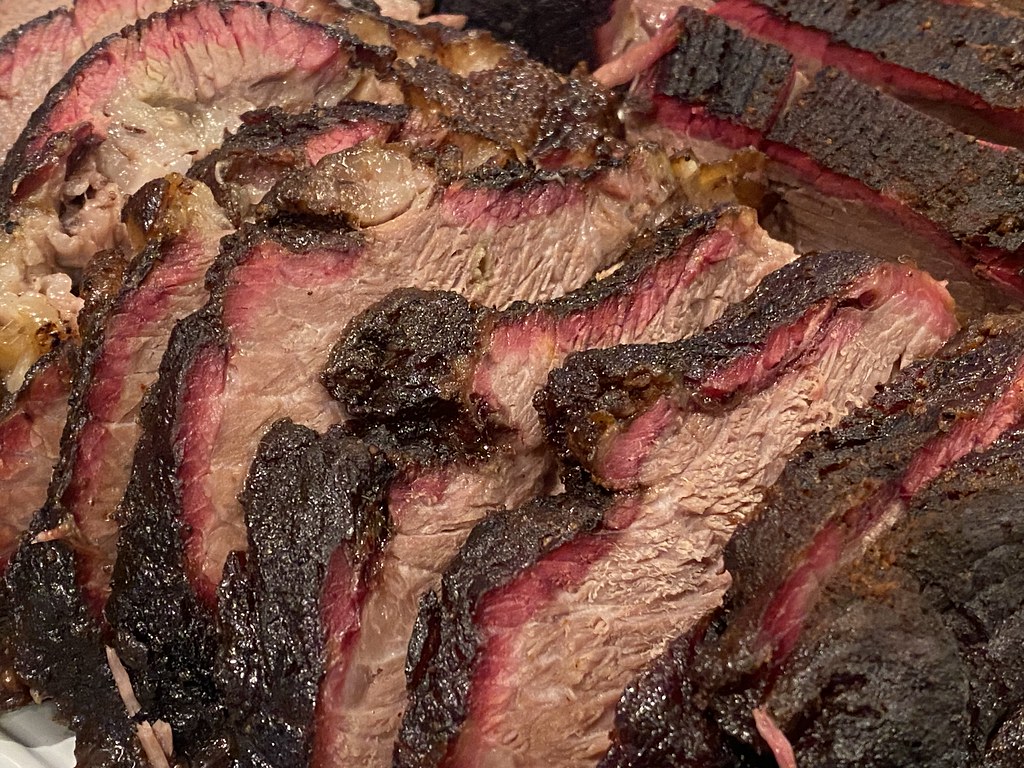 Last night and this morning I smoked an “overnight brisket,” with a 10 pound Costco prime brisket and Clark Crew BBQ Jack’d Rub. The brisket turned out great, and may be my most pronounced smoke ring on a brisket ever (since it smoked before the wrap a full 7 hours) but I think I actually prefer some of my other brisket seasoning / rub combinations. This Clark Crew rub is AMAZING on chicken thighs, salmon steaks, and pork chops, however! It’s definitely a keeper!

I recorded and edited a 9 minute video showcasing the highlights of the brisket slicing, tasting, and sharing (with Rosie and Moose!)

Here’s a cross-post from Facebook this morning, of a mini-novel I dictated using my iPhone. This was, incidentally, my first YouTube video to shoot using my new (but used) iPhone 11 Pro Max. I love the wide angle lens!

Good morning and happy fall Saturday! Thanks to the magic of iPhone dictation, I’m ready to “talk a lot of brisket today!”

This weekend I’m having my first opportunity in a while to cook / smoke an “overnight brisket,” and boy am I excited to be back in the saddle with a brisket cook! I either wanted to smoke a pork shoulder or brisket this weekend, and Shelly voted for brisket, in part because it makes the house smell so good on a Saturday! Here’s a summary of how things have gone through “the wrap,” which today is after seven hours of cook time.

Before I go further, here is the link to my YouTube video about cooking overnight brisket and finishing it in the oven, which is what I am doing today with just a few modifications. This has been my most popular YouTube cooking video for awhile, with over 10,000 views, I think because in the title I used the phrase, “Aaron Franklin method.” It’s also good that I have a delicious looking thumbnail on the video:

Generally I have found the first phase of a brisket cook for a piece of cow goodness around 12 to 14 pounds is something like five or six hours. The pros will tell you you want to cook the brisket unwrapped until the internal temperature reaches about 165°. You can probe for tenderness at this stage, but probing is really easiest when the brisket is finished, and sticking the meat probe in the brisket is “like putting it in a pat of butter.”

Generally I cook to 165° (setting the smoker to 250°) and then wrap. For overnight cooks, this means I’m best off putting the brisket in at midnight or 1 AM. And guess what, I didn’t want to stay up that late last night, so I ended up putting it on the smoker at 11 PM. One of the fantastic benefits of having a pellet smoker is not having to babysit the smoker and manage your fire all night long. I know some people are really into that and love it, but for me at this stage in my life, I really enjoy the benefits of technology which canal include a good nights sleep. Sometimes I will not wake up at all during an overnight cook, but tonight I did wake up after three hours, about 2 AM, and came down and sprayed some Apple cider vinegar on the brisket to moisten it. Not required, but if you can this can help improve final results, I have found.

When I trimmed the brisket last night, I applied yellow mustard as a binder and then for the first time used Clark crew BBQ jacked brisket rub. In the last two weeks we have had this on salmon, chicken, and pork chops. This is my first time to try it on brisket. It’s a really amazing rub, and I can’t wait to taste the brisket results. This is a local Oklahoma City barbecue restaurant and competition team, I found this at Firebirds Meat Market in Northwest Oklahoma City. Here’s the direct link to order if you’re interested:

When I started cooking brisket I went traditional with just a 50% salt, 50% pepper rub, which is called cooking a brisket, “Texas style.” Of course there are thousands of different brisket rubs and sauces, so the temptation is to try different concoctions. Probably my favorite at this point is Kosmos combination of SPG (salt pepper garlic) and “Cow Cover.” But I also really like “Butcher BBQ Stand‘s Grilling Addiction” rub. Both of these are based in our Oklahoma City area, Butcher Barbecue Stand is out in Wellston. Kosmos is well-known nationally, but only has one store and it’s right downtown off of I-40. I have also tried the “black ops rub,” but I can’t give a definitive answer if that beats the others. All of these briskets with different types of seasoning rubs have turn out pretty amazing, and leave everyone pretty happy, so it is honestly a little hard to differentiate at this point.

Again going back to pro advice, many people prefer to use a seasoning rub which has separated the salt and pepper from everything else, so you can more closely control the quantity of salt you’re putting on your meat. But that’s just a rule of thumb, not “unbreakable gospel BBQ truth.”

So back to today’s cook. Since this is a little smaller piece of meat, just 10 pounds and that is small for a brisket, I probably should have removed it after about five hours on the smoker. But, I didn’t want to set an alarm, so I got up at six after I’d been cooking seven hours. The probe temperature was just over 170°. One reason you wrap at 165 is to push through “the stall,” which is a point in the Brisket cook where it can take a while for the brisket to continue to gain temperature. This has to do with the chemistry of water in the meat, and that is about as complex as I can explain it right now.

People do smoke briskets “completely naked,” and that means they never wrap the meat. These cooks can apparently turn out good for some people. I have never used that method, but today is the longest I have cooked a brisket before the wrap.

Over the summer I enjoyed doing my entire brisket cook on the pellet smoker, because I didn’t want to use the oven and heat things up inside the house. But this morning, it is 42° outside, so an oven finish makes sense. After you wrap the meat, you do not add very much smoke flavor, so you’re just adding BTUs or heat to the meat. And this definitely makes the house smell amazing on a Saturday.

It is critical to have a thermometer at all stages of a barbecue cook, and for oven finished brisket I enjoy using my Thermapro RF thermometer. It has two parts and so the receiver lets me use it wherever I want inside the house, and monitor the cook. It also has an alarm.

So, I’m expecting probably three more hours of cook time, but it could be longer, until internal temperature reaches 205° in the thickest part of the brisket. Then I will let it rest all afternoon in a cooler, and slice it this evening. I will probably record that with video. Last point about today’s cook: when I wrapped this morning, I melted some Wagu beef tallow (I ordered it off Amazon) in the microwave, but only brushed my butcher paper with it. In the past I have directly brushed the meat with melted tallow as well as well. The last few cooks I have used with this method (this is called @the Aaron Franklin method,” and was pioneered by BBQ YouTuber Jeremy Yoder) some of my briskets have actually been TOO moist. By “too moist,” I mean when I picked up a sliced piece of brisket, it just kind of fell apart, it didn’t “stay together” until I pulled it apart. So we’ll see what results this yields today.

Let me know if you have any brisket questions! If you have not smoked a Brisket and you have a smoker, he really should give it a try. It definitely is the most challenging piece of beef to cook properly, because there are a lot of different factors to keep in mind, but I also find it to be the most rewarding and most tasty!