I’ve been cooking homemade pizzas for a couple months now on the “wood fired pizza attachment” from Green Mountain Grills, which fits perfectly on my RecTeq RT-700 Bull smoker / pellet grill. This is the first time I’ve written down the results of my iterative experiments, however, so I’m hoping this documentation will lead to better results. This afternoon I cooked a frozen “regular pizza” for our daughter and also attempted to cook a healthier / reduced carb option for my wife and I. Here’s what I tried and learned.

Pizza dough is not extremely difficult to prepare and use, but it’s a lot faster and easier to buy pre-made dough or a pre-made crust. The first few times I cooked pellet smoker oven pizza, I used prepared pizza dough from Trader Joes. Our Trader Joes has a couple different flavors, and they both tasted and turned out great.

The benefit of using an outdoor pizza oven of any kind, which uses a pizza stone, is the ability to get the fire and stone so HOT that the pizza cooks much faster and therefore has a crust that tastes amazing. Oven baked pizza can be good, but pizza oven pizza cooked on a hot stone can be as good as restaurant pizza! I learned about the Ooni Wood Pellet Pizza Oven sometime last year, and wondered if I’d be able to get one some day. Apparently demand has been higher than ever during the pandemic, with people spending so much more time at home. However, when I learned the GMG pizza oven attachment would work fine in my RecTeq smoker, I was sold! This was my family’s birthday present to me / my birthday present to myself this past August. It’s been great and we’ve used it a lot!

One of the most important ingredients and utensils I learned about when I started doing research (on YouTube, of course!) when you’re cooking with a pizza oven stone is Semolina Flour and a pizza peel. I put some Semolina Flour down on the pizza peel before I put down the crust and start saucing it up / adding ingredients. The flour acts like miniature “ball bearings” letting the dough slide easily, so you can get the pizza into and out of the oven quickly and easily. This took some practice, but I’m adept at it now. It’s a little like learning to flip over an egg (in the air) in a skillet on your stove. It takes confidence and a smooth motion, but it’s very doable with a little practice!

One thing I still don’t know, since I don’t yet own a Termapen IR which can directly scan the surface temperature of something like an pizza oven stone, is how hot my pellet smoker pizza stone is getting. When you set the pellet smoker temperature to 350 or 400 degrees, I’ve learned via YouTube the temperature most likely is approximating something like 600 degrees. That is because the oven pizza attachment focuses the heat output from the smoker’s firepot into a small tube, and directs it up to the pizza stone. So the effective temperature of your pizza oven is MUCH higher than the “set temperature” of your grill / smoker. 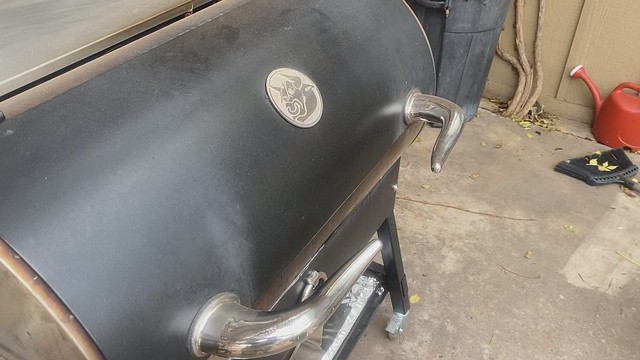 In the past, I’ve set the smoker to 350 degrees or 375 degrees and cooked for five or six minutes per pizza. Those results have been good, especially when I used “regular pizza dough” and the one time I made my own cauliflower pizza dough from scratch. That latter dough wasn’t quite as crispy and thick as the “regular dough” pizzas or some of the pre-made cauliflower crusts we’ve tried, however. But it was still tasty. We’ve tried using turkey pepperoni instead of “real” pepperonis, and I’ve decided to stick with the REAL thing. Turkey is an acceptable substitute in some recipes, but for me, pizza stone pizza demands REAL pepperonis.

As Shelly and I are continuing on our shared “health and wellness journey,” we’re trying to eat more “lean and green” meals and cut carbs wherever we can. Shelly has reached her weight loss goal, so she’s able to eat more carbs here and there to a greater extent than I want to… But overall this health journey has positively encouraged us both to explore some new and healthier food options. Trying alternatives to “traditional pizza crusts” is one of these areas of culinary experimentation.

The thin, blue package cauliflower pizza crust from Trader Joes is OK, but not fantastic. It’s just so thin, I haven’t been able to get it to make a satisfyingly crisp and solid pizza crust like I’m used to. I’ve probably cooked five or six pizzas to date with this crust, and I don’t think (after today) I’ll use it again.

Here’s a photo of one of today’s pizzas, cooked on that Trader Joes cauliflower pizza crust. It’s unfortunately just a little OVERCOOKED, however, and I think that was because my pizza oven stone was TOO HOT. For the first time today, I cranked up the temperature set point of the grill to 400 degrees. Again I don’t know the exact temperature on the stone’s surface, as I’m not armed with an IR thermapen YET, but I’m guessing I was hitting 700 degrees. Six minutes on the stone at that temperature was too much heat for this thin crust pizza.

Today I cooked with a second type of pre-prepared cauliflower pizza crust: a Clo Clo Vegan Cauliflower Pizza Crust. I bought this crust at Sprouts grocery store in OKC. These crusts are definitely crisper and stiffer, and preferable to the Trader Joes version, but I wouldn’t say “the flavor was amazing.” So my quest for an excellent pizza crust alternative continues. I bought an almond pizza crust today at Crest Grocery Store, and I’m eager to give that a try soon.

I also cooked a DiGiorno pizza today for our daughter, which is supposed to be a terrific way to enjoy a frozen pizza. Its crust was a LOT thicker than the cauliflower pizzas I was cooking, however, so some of the inside of its dough didn’t fully cook even though I left it in the pizza oven for about 8 minutes. I’m not positive, but I think I needed to turn DOWN the heat a little and cook it a bit longer for perfect results.

Over the upcoming Thanksgiving break I’m planning on cooking some pizzas for lunch or dinner one day for our family guests, and it should be fun to let everyone “build their own” pizzas. I’m hopefully going to provide cooked sausage, pepperonis, green pepper, ham, pineapple, and maybe even mushrooms (gasp! – since I don’t actually care for mushrooms but other members of our extended family definitely do!) When I do those cooks, I’m going to try and set the RecTeq smoker to 350 degrees and cook for six minutes. I’ll log those results, documenting them here, so hopefully these cooks will keep getting better.

Here’s an addition from December 11, 2021: I’ve found my FAVORITE cauliflower pizza crust so far: “Caulipower’s All About The Base Cauliflower Pizza Crusts!” I created a short (90 second) video about this cook last week. These pizzas turned out crisp and amazing! I can’t wait to cook these again!