I love to cook and eat quiche for breakfast, and have used several recipes over the years. The recipes “Bacon, Egg & Cheese Quiche,” “Christine’s Quiche,” and “Quiche Montezuma” are three recipes I got from my mother years ago and have tried. Today’s quiche is a combination of ideas from several of these, using bacon, bratwurst sausage, tomatoes, sweet peppers, and cheddar cheese in the filling. 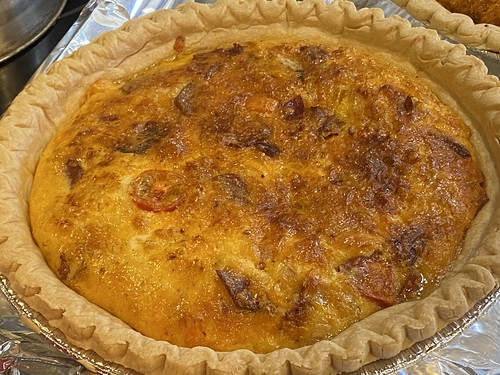 Our older daughter has followed in her grandmother’s footsteps (Shelly’s mom, Clara, whose favorite recipes are also on this website) by sometimes cooking her own pie crusts from scratch. I have never tried to cook a crust from scratch and have always used store-bought crusts. Today I used Pillsbury Deep Dish Pie Crusts, and chose to cook two quiches at the same time. When I have followed some of the previously linked recipes to the letter in the past, I end up with more filling than I need. Sometimes the quiches have even overflowed out of the crust. So today, mainly using the recipe for “Christine’s Quiche,” I used 5 eggs but separated the entire filling mixture between the two crusts. 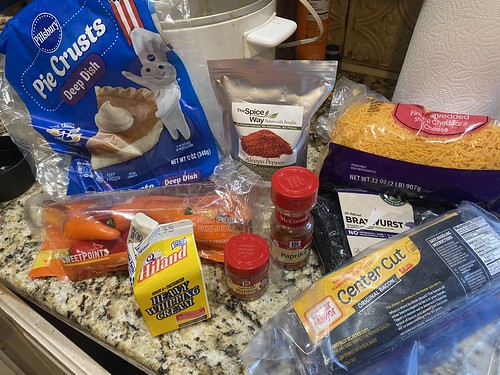 I started by cooking 4 pieces of thin bacon, left over from yesterday’s jalapeño popper cook. I chopped and sautéed an onion in the leftover bacon grease, and then added a chopped bratwurst sausage from ButcherBox (that’s my affiliate link, BTW) which I still had in the fridge. For veges, I chopped up some cherry tomatoes and some sweet peppers. 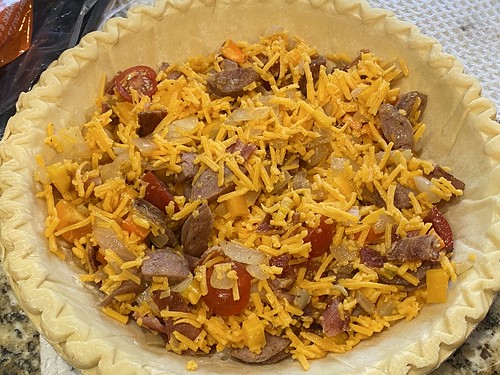 In addition to adding some of my favorite Aleppo Pepper from The Spice Way, I also topped off the quiches (once I poured them into the crusts) with a little paprika for color. 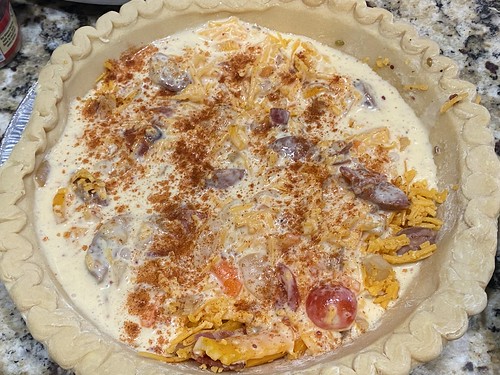 I definitely could have added 1 or 2 more eggs to make these even larger, but they turned out great. I’d much rather have quiches which are a little under-filled than overfilled quiche crusts which overflow. (Been there, done that…) 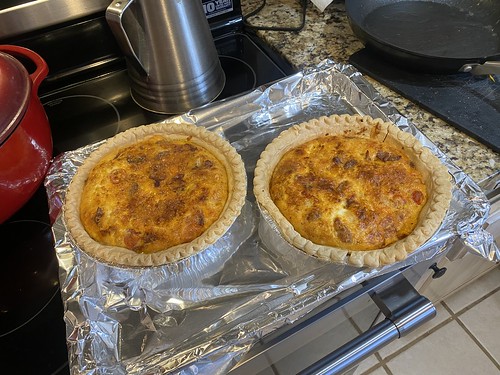 As recommended in the “Christine’s Quiche” recipe, I cooked these initially 15 minutes at 400 degrees, then turned the oven down to 350 degrees and cooked for 35 more minutes. Turned out perfect and delicious! I do like veges (and we’re eating a lot more overall because of our new health / diet / wellness plan*) but I LOVE meat and “savory” foods. So having BOTH bacon and sausage in this breakfast quiche is perfect for me!

Bruce Feirstein may be a talented writer and humorist, but he did a great disservice to breakfast experiences in the English speaking world when he published his 1982 book, “Real Men Don’t Eat Quiche.” Real men DO INDEED eat quiche, and they even cook quiche and serve it to their families to great acclaim!

Long live breakfast quiche, and the kitchen chefs (of any gender or sexual orientation) who cook them! 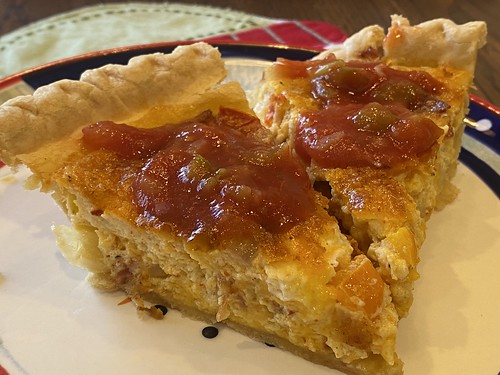 * To be clear, this breakfast quiche recipe is NOT on our “approved 5-1 diet plan.” Today is actually the first time I’ve eaten something with a pie crust in over 4 months! Shelly is now in “transition” in her diet plan, and I’ve made a few exceptions to my “normal” eating routines over the holidays this year. This is one of my “exceptions,” and it was delicious!