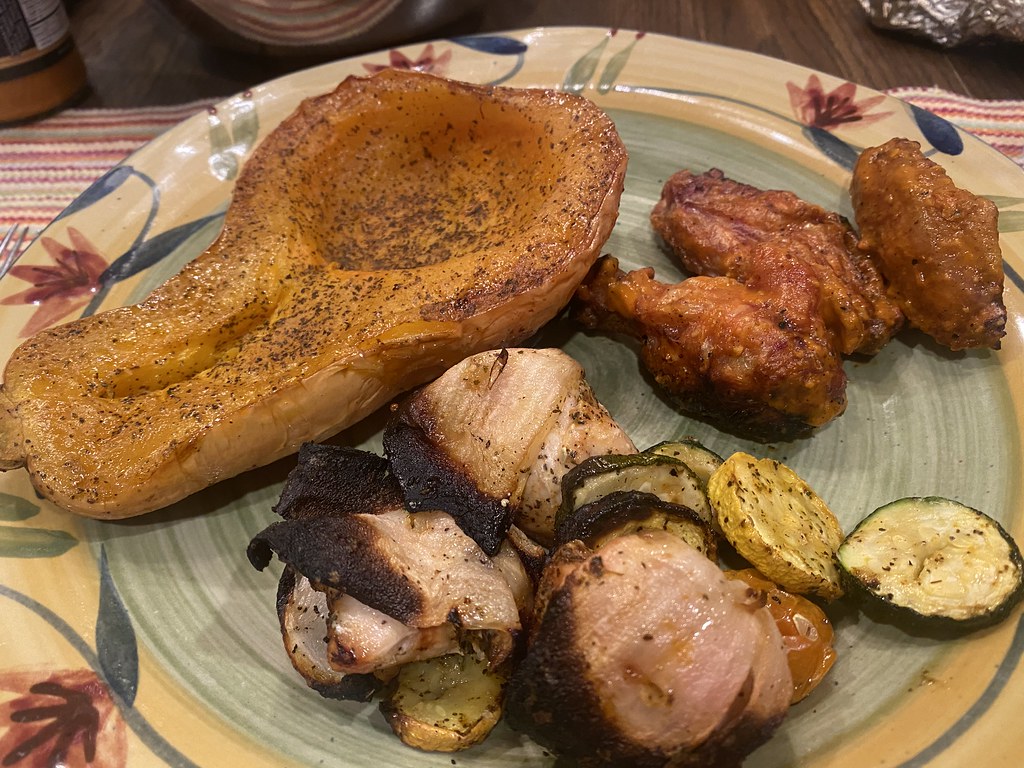 Last night I originally thought I would just grill out (smoke on the pellet smoker) some chicken. Watching our AI powered “recent highlights” album from Google Photos on our bedroom Chromecast-powered TV, however, I saw a photo of a past shish kabob cook. This inspired the thought, “I can cook that tonight!”

We LOVE enjoying shish kabobs. I actually love beef shish kabobs over chicken, but both can be very tasty. I was a little low on cherry tomatoes, and skipped bell pepper, but these were still tasty with yellow onion, yellow squash, green zucchini, a few cherry tomatoes and chunks of chicken breast. I drizzled some olive oil over the ingredients and seasoned with Traeger rub.

These veges and chicken chunks turned out good, and we didn’t have any left at the end of dinner… so that’s almost always a good sign. Next time, however, I’ll smoke at 350 degrees instead of 400. 400 is great for chicken thighs, but I think chicken breasts and wings do better with a little less temperature for approximately the same cook time.

In addition to the shish kabobs, I smoked one of my favorite kinds of squash to eat, “Courage Butternut Squash” which I purchase and first saw at our local Sprouts grocery store.

After cutting the squash in half (with a formidable kitchen chopping knife my mom gave me a few years ago) and scraping out the seeds / guts, I drizzled a little olive oil on the flesh and seasoned with Traeger Rub.

I wrapped the flesh-side of the cleaned squash with pieces of foil, and folded up the edges so just the flesh and the first 1/3 inch or so of the back skin were covered.

I placed these face-down on the pellet smoker at 400 degrees, and ended up cooking them about 1.5 hours. With hindsight, I should have just set the smoker at 350 degrees, as I had in the past.

These turned out tasty, but they were a bit overcooked, although not to a noticeable fault. The savory flavor with that Traeger rub on these squash is really superb. This savory flavor is a good contrast to the typical “butter and brown sugar” topping which many people use on sweet potatoes and acorn squash. I do enjoy acorn squash, and here’s the link to my favorite recipe, but I also enjoy “mixing it up a bit” with our squash dinner options.

We could have eaten these as an appetizer if they would have been done sooner: I also smoked some chicken wings. I cooked these ‘naked’ on the smoker at 400 degrees for 45 minutes, which was just a little too much. They were crispy and delicious, but cooking at 350 degrees would have yielded a little tastier / moister experience, I think. I tossed these in “Pepper Palace Wing Master Garlic Parmesan” sauce. This is GREAT stuff! Pepper Palace is based in Tennessee, and we have a local outlet store in our Yukon, Oklahoma outlet mall on I-40. Honestly, I could have probably eaten an entire cookie sheet full of these if I’d made ’em… especially if they were cooked JUST a little less.

Overall, this turned out to be a fairly spectacular Wednesday night meal. Besides cooking more chicken wings (which we honestly didn’t need last night) the only other thing I’d change about the meal was cooking at 350 degrees instead of 400 degrees, or reducing the cook time a bit.