We had a lovely Thanksgiving day and dinner yesterday here in Matthews, North Carolina. This was the second year I’ve smoked our turkey outside on my RecTeq RT-700 Bull smoker. In this post, I’ll document the recipes and cooking techniques I used which yielded yummy results I’d love to replicate again! If you try any of these recipes or ideas, please let me know with a comment below or via other means. 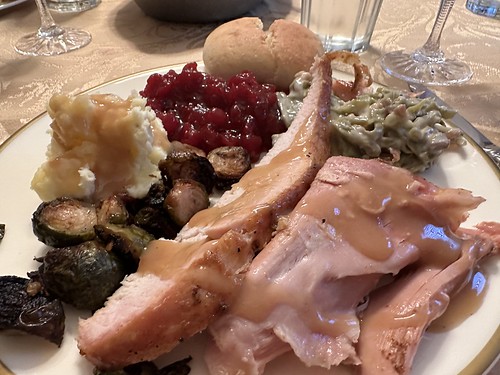 Let’s start with our menu. Since there were just five of us, which is pretty small for our “normal” Thanksgiving gatherings, we had to scale back our selections. Turkey, gravy and rolls were a given, so everyone else got to select a side dish. I’ll link these to the recipes we used. This was our plan:

The items below we initially WANTED to include on the menu, but decided NOT too because we simply didn’t need to prepare that much food this year.

Our holiday mornings, for many years now, have been marked by the wonderful smell of sausage balls cooking in the oven. These are super easy to make, and in addition to the yummy flavors and delicious smells, we also have great family memories of cooking (and documenting the cooking) of sausage balls during holiday seasons gone by.

Sausage balls were our breakfast and snacking food in the morning, watching the annual Macy’s Day Parade. 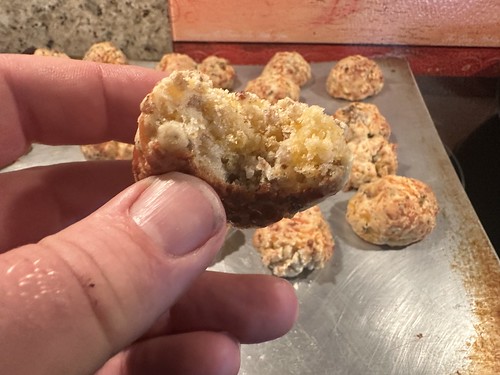 Later in the day, Sarah created an amazing charcuterie board using different goodies from Trader Joes, where she now works part-time. My favorites were the meat and cheese rollups, the black and green olives, the cheese sticks, and the hummus on crackers. 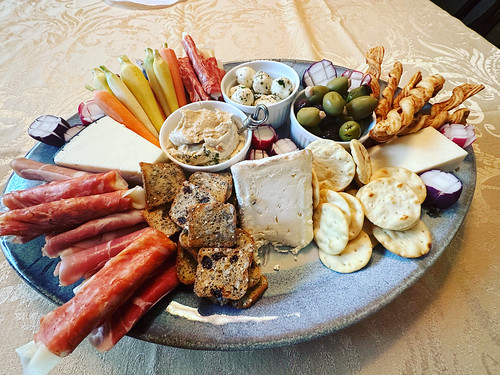 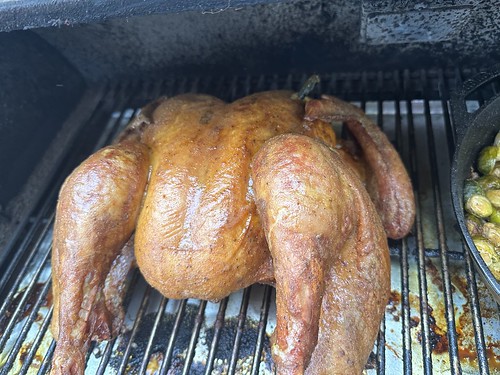 “Thanksgiving Turkey: Smoked on the RecTeq” (CC BY 2.0) by Wesley Fryer

This was my second year to smoke the turkey on my pellet grill, and it turned out better and juicier than ever. A MAJOR success that I’d love to repeat every Thanksgiving, since some years the meat (cooked in the oven) has turned out rather dry and not nearly as tasty.

I mostly followed the recipe in this video by Matt Pittman, who is the creator of the “Meat Church BBQ” YouTube channel and BBQ rubs / seasonings.

We bought a 12 pound turkey this year from Trader Joes, which comes pre-brined. Sarah bought it for us the weekend prior to Thanksgiving, so it had several days to defrost in the fridge and be ready for cooking. The night before, I spatchcocked the bird, cutting out the backbone and splitting the breast a little so it lays pretty flat on the grill. I sprayed a little olive oil on the front and back, and seasoned generously with Kosmos Dirty Bird rub. Kosmos is based out of Oklahoma City, and I had a little left over from last Thanksgiving, but thankfully it’s sold by our local WalMart chains here in North Carolina. I put the seasoned bird on a wire rack on a cookie sheet, wrapped in foil, in the fridge overnight. 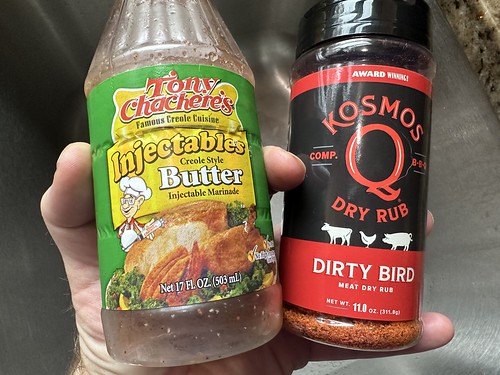 “Turkey Injection and Rub” (CC BY 2.0) by Wesley Fryer

I planned for about a 3 hour cook at 275 degrees on the pellet smoker. Before putting it on the grill (after pre-heating, of course) I injected it with some Tony’s Injectable Creole Style Butter, which I also picked up at WalMart. It comes with a syringe, and I injected generously on each side of the breast, in each leg, and in each thigh of the bird. I put the turkey on the smoker about 12:30 pm, thinking we’d end up eating around 3:30. That estimate proved good, as we were able to eat at 4 pm. During the cook, I basted the turkey once with some melted butter. I added a glaze of melted butter, local clover honey, and dijon mustard 15 minutes before taking the turkey off the grill. (That basting and glaze was recommended by Matt in the video above.) 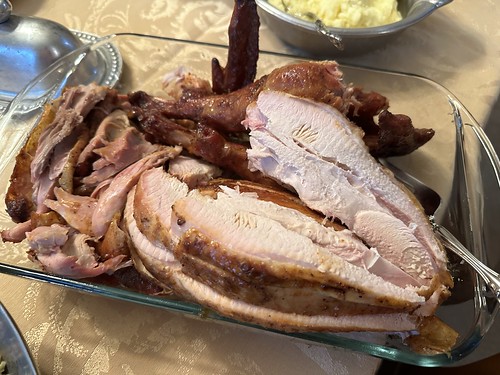 “Thanksgiving Turkey: Sliced and Ready to” (CC BY 2.0) by Wesley Fryer

The turkey itself was some of the moistest I think I’ve cooked for Thanksgiving. I was glad my electric knife not only survived the move from Oklahoma, but was also in a cabinet where I could find it yesterday when I needed it! I’m generally a big fan of dark meat, for both chicken and turkey, but this bird turned out so juicy I loved both kinds. I’m excited to have a turkey sandwich today for lunch on our traditional pumpernickel bread! I think the Tony’s injectable butter was key for keeping the meat so moist. 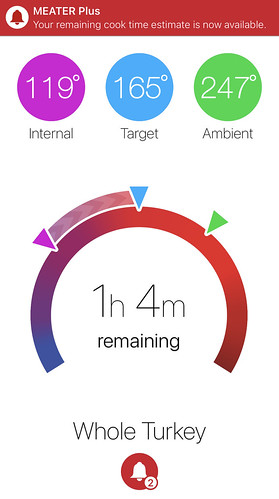 Another important ingredient this year was my use of a MEATER+ thermometer during the cook. Thankfully I had an extra AAA battery to put into the wooden block “bluetooth repeater.” 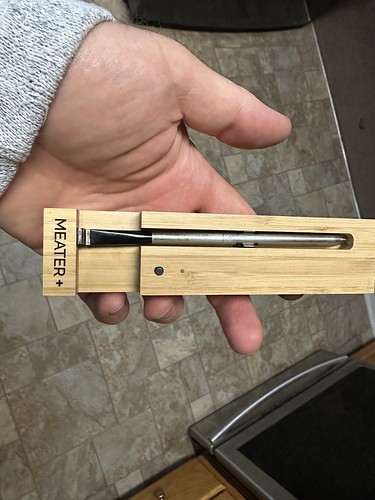 The MEATER+ told me exactly when we hit an internal temperature of 160 degrees, so I could take it off and the bird continued to heat up (under a foil tent for about 20 minutes) to an internal temp of 165 degrees. This was the most accurate temperature cooking I think I’ve ever done for Thanksgiving, and I believe we could taste the difference in the moistness of the turkey meat, especially the breast meat. 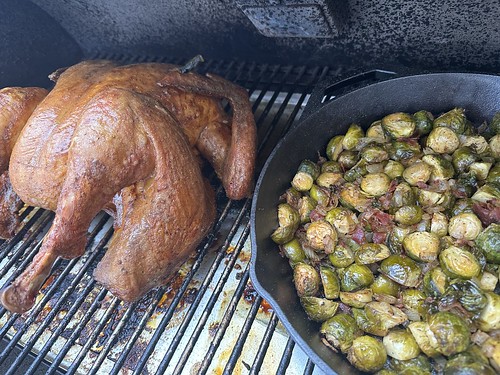 For the last hour of the cook, I put on a cast iron skillet of prepared, fresh Brussels Sprouts. I slightly altered my usual / normal recipe for roasted Brussels Sprouts by adding 4 pieces of crumbled, fried bacon along with a chopped, sautéed onion. Usually I smoke Brussels at 350 degrees, but since I was cooking at 275 degrees for the turkey, these did not get as crisp as I wanted. So, I cranked the grill up to 400 degrees, and cooked them for 30 more minutes. 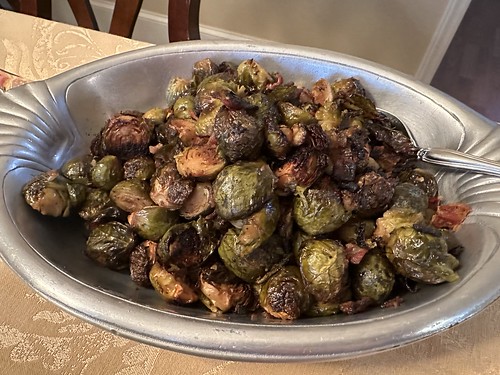 “Roasted (and crispy) Brussels Sprouts” (CC BY 2.0) by Wesley Fryer

This resulted in roasted Brussels Sprouts which were LITTLE too crispy, but were still ediable and pretty tasty. Next time I’d just crank the smoker temp up to 350 (instead of 400) and cook for an additional 15 minutes instead of 30.

Now on to our other side dishes.

Both of our girls ADORE traditional green bean casserole, which is super easy and fast to make. We doubled the recipe this year. It’s wonderful when a “crowd pleasure” recipe like this is affordable, fast and easy to make! 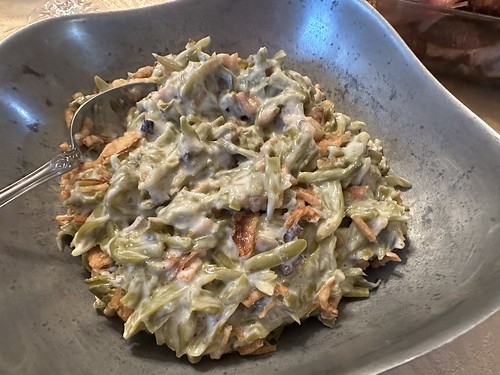 The Sister Schubert’s rolls were also easy and fast, since they came right out of the freezer and just baked in the oven about 15 minutes. We love to have these for Thanksgiving, but one year we did get rolls directly from Texas Roadhouse restaurant, complete with their famous honey butter. THOSE are “the ultimate” Thanksgiving rolls in my book. (And probably Sarah’s, too!) 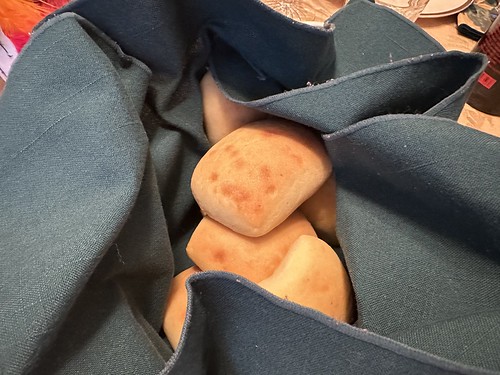 Sarah was a huge help in the kitchen this year, not only preparing the charcuterie board, but also garlic mashed potatoes, the green bean casserole, the rolls, and pumpkin pie. 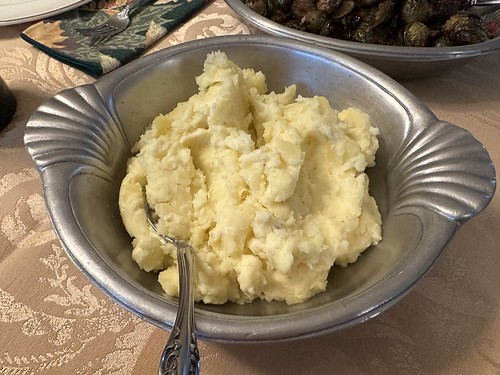 “Garlic Mashed Potatoes for Thanksgiving” (CC BY 2.0) by Wesley Fryer

Turkey gravy this year was simple and delicious, a double package of McCormick’s Turkey gravy mix. I made this on the stove just before serving the entire meal, so it was relatively hot and ready to pour. (How else should turkey gravy be served?!) 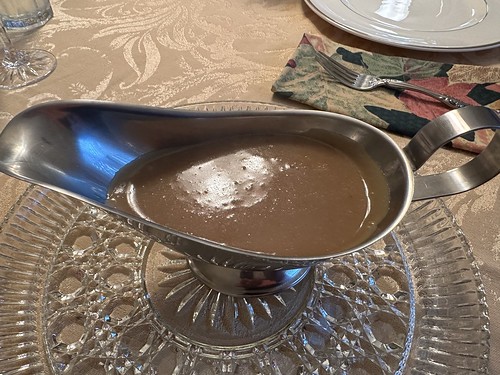 Last of all but not least, my favorite: Cranberry sauce! I went WAY overboard this year with 32 ounces of fresh cranberries, and quadrupled my “normal” recipe. In addition to prepping the turkey for the fridge the night before / on Wednesday night, this was the only other recipe I had to make in advance. It’s vital the cranberry sauce sits in the refrigerator overnight to cool and solidify. (One year I tried making it the same day, and was WAY too runny to be fully satisfying.) 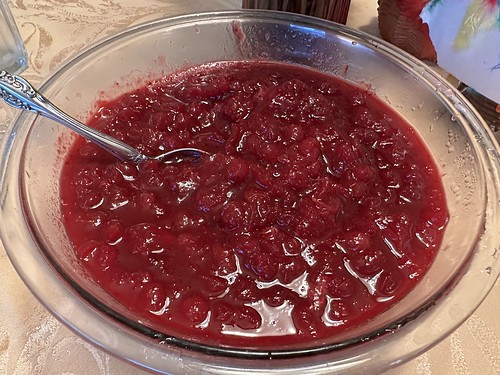 Making the cranberry sauce the night before Thanksgiving also has the benefit of making the house smell awesome, and “like the holidays.” Similar to green bean casserole, homemade cranberry sauce is really easy to make and tastes amazing.

I feel so strongly about cranberry sauce for Thanksgiving, I’m confident to say:

“If we don’t have cranberry sauce for dinner, we’re not truly eating a Thanksgiving meal.”

For dessert (which amazingly, I did NOT photograph) we had both pumpkin pie and a delicious pineapple upside down cake our lovely next door neighbors gave us. A wonderful end to a wonderful day of eating and relaxing! 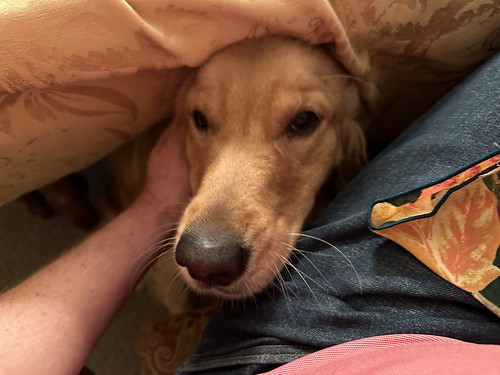